A slight deviation from my usual web development posts but thought I’d share my experience and solution to what seems to be a common issue with the new GoPro HD Hero 3 Black Edition relating to microSD cards – SD ERR.

This is my 3rd GoPro, having previously owned the 960 and the 1080. With the exception of a faulty battery on my 1080 (which GoPro promptly replaced), I’d experienced no issues with either so was a little dismayed to find that I couldn’t just fire up the camera and start shooting out of the box.

The day I ordered my GoPro 3 Black Edition (from a seller on eBay) I also ordered a class 10 32Gb microSD card from a different seller. As many will do, I opted for the cheapest option rather than a name brand (long story short – this is the issue).

When both arrived, I put the microSD straight from the packaging into my new camera and turned it on, only to be presented with the message “SD ERR“. A little perplexed by this, I did some research and found a number of forum posts with similar issues, suggesting formatting the card would solve my woes. I plugged the microSD into the supplied adapter and into my laptop and formatted the microSD (on Mac OSX – Disc Utility > Erase (MS-DOS (FAT))). I popped it back into my camera and sure enough the error had gone away. I proceeded to perform the manual firmware update and took a couple of photos. Everything seemed fine.

A couple of days later, I took my my new GoPro Black Edition out to film for the first time. I wanted to try some sweet slow-mo’s with WGA 240fps. I set the camera up, connected to it through the iPhone app and pressed record. I went back to the camera a couple of minutes later and it wasn’t recording. Strange. Maybe I hadn’t pressed the record button. I started recording again and watched it. It cut out after 11 seconds (I found reports online of other people’s cutting out at 4s, 8s and some seemed to be random, sometimes 2s sometimes 2 minutes). It did this over and over again.

When I got the footage home and plugged it into my mac, all the video files I had recorded were there but they were an identical file size (~42MB) and seemed to be corrupt. They wouldn’t play in VLC (I’ve never had issues playing raw GoPro video on VLC before) and Quicktime was telling me they were an unrecognised file type. I tried formatting the card again a few times and kept getting the Same “SD ERR” I had before.

I sent an email to GoPro to this effect. Very fast reply which I appreciate but it was mostly a copy and paste response and there was not a lot of useful info. I have pasted their reply below for reference.

I turned to Google again and discovered that class 10 memory cards can vary greatly in quality so decided to splash out for a quality one to see if this would work. I bought the sandisk card recommended on GoPro’s site. I put it into my camera and it worked straight away without needing to format. I can record for as long as I want at any res and frame rate and so far no issues.

It wasn’t a problem with the camera. It was just me being a cheapskate.

This is the Sandisk card I bought which you can buy from amazon here: http://amzn.to/13exDNn 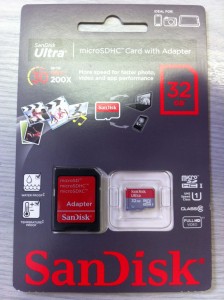